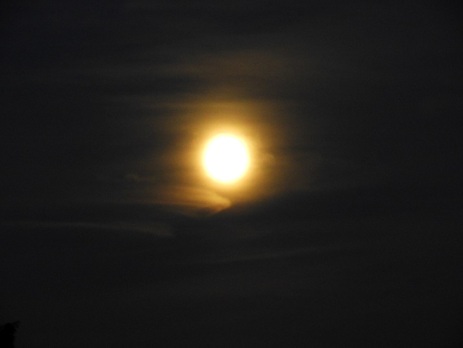 I looked at my calendar to see when the full moon was this month and, bam, there it was. Friday the 13th!

What could this possibly mean? Has this ever occurred before? I had to see what the soothsayers said about it, or “seers” as the priestesses in Marion Zimmer Bradley’s books are called. I happen to be reading about the priestesses of Avalon.

The Harvest Moon of September 2019 will occur just as the days morph from the 13th to 14th, shortly after midnight on the east coast.  But for the rest of us, it will still be the 13th.  This phenomenon has happened before, but it’s generally uncommon.

Astronomers say the moon will appear somewhat smaller this month because it’s at its farthest point from earth – apogee.

No matter. This “micromoon” will still send full-moon energy. A full moon is the ending of a particular cycle, and marks the beginning of a new one.

Full moons are usually known as times when emotions can go awry. People get crazy, wolves howl, werewolves go abroad. Pair that with an equally freaky day, Friday the 13th, and let the games begin!

One “seer” notes that this full moon will rise in the constellation Phoenix, a powerful symbol of rebirth. However, it is tempered with a host of astrological arrangements.

“Jupiter square Neptune” can foster unpleasant things like trusting too much, falling prey to scams, and suffering losses or disappointments. The position with Mars can bring moodiness, anger, delusion and impulsiveness.

But while “full moon conjunct Neptune” brings confusion and deception, Neptune rules hopes, dreams and spirituality, and the position of Pluto, our poor little downgraded orb, contributes positive energy for rebirth and moving on from destructive behaviors and emotional baggage.

The number 13 has long been considered unlucky, so it follows that the 13th day would also be unlucky. And for some, the 13th falling on a Friday is especially worrisome.

The fear of this number is called triskaidekaphobia. Superstitious people generally avoid walking under ladders and spilling salt.

Other taboos are opening an umbrella in the house and putting shoes on the table, both things my mother forbade! Even hotels don’t have 13th floors, most buildings don’t have one, and most elevators do not go to a 13th floor! Would you live or work on the 13th floor?

According to some historians, “Western cultures have historically associated the number 12 with completeness (12 days of Christmas, 12 months and zodiac signs, 12 labors of Hercules, 12 gods of Olympus and 12 tribes of Israel, just to name a few).”

On the other hand, the number 13 is odd and therefore bestowed with incomplete qualities and has not been so celebrated. It is said that the ancient Code of Hammurabi omitted a 13th law from its list of legal rules. This may have been simply a clerical error.

Furthermore, the  seating arrangement at the Last Supper has led to a longstanding Christian superstition that having 13 guests at a table was a bad omen. The day following the Last Supper was a Friday. Many superstitions seem to arise from religious beliefs or events, while others appear linked to practical considerations. 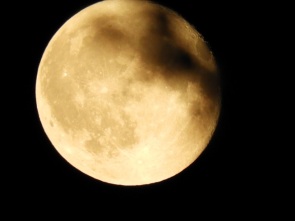 But not everyone subscribes to these notions. In the late 19th century a New Yorker even created an exclusive club called, what else, The Thirteen Club. He thumbed his nose at all the myths surrounding the number, and invited 12 other men to join. They met on the 13th day of each month, in room number 13, and dined on 13 courses. Apparently, they all dodged bad luck.

Are you willing to test it? Go ahead, walk under a ladder, pet that black cat, and spill some salt! I dare you!

Good tidings under the Friday the 13th Full Moon! 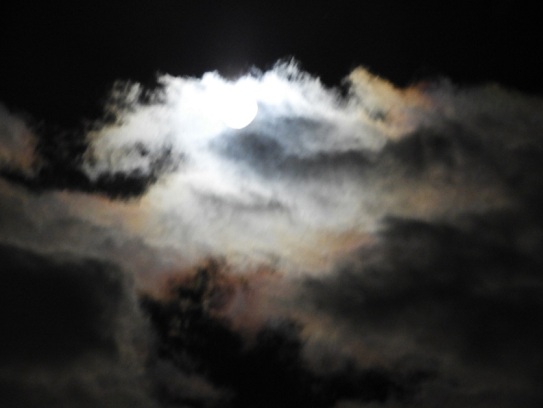 These are names for what I believe is my little tree in the front yard! It has stymied me since I moved in 12 years ago. I suspected it was a kind of willow, but when I searched “willows,” none matched my tree. It’s not weeping and it has really small, narrow leaves. It has catkins in the spring, a willow-like characteristic, and gets lots of suckers and turns yellow in fall. 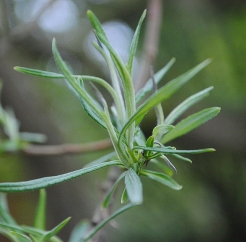 This morning, I broke off a small branch, including catkins and leaves, ready to send it off the National Arboretum in Washington, DC, for identification.

In one last ditch effort, I searched the internet for “trees with catkins.” This time, It didn’t take long to find a photo that looked like mine! “Osier willow” was what was pictured, a tree native to the United Kingdom and across Europe to western Asia. I am 99.9% certain that this is what it is. 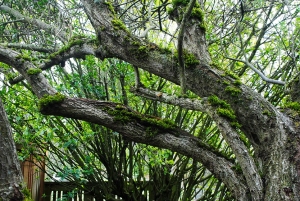 I have a female tree, according to the description of its green catkins.

Male trees have yellow ones. Interesting! These trees favor wet areas and their branches have widely been used for basket making. 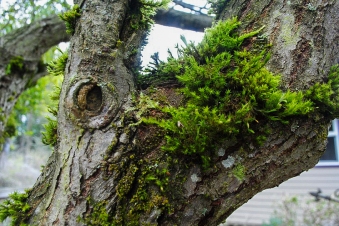 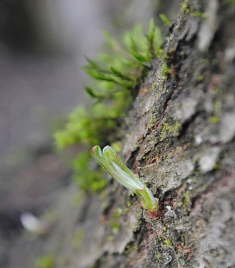 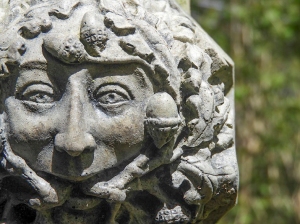 But, more interesting is the folklore associated with osiers. According to one British website, Chediston, Suffolk, has a local custom known as a ‘willow stripping’ ceremony. Typically held at the first full moon in May, this Druid-like event features a ‘Green George” figure dressed in willow strippings, who dances around and is then ceremoniously thrown into the local pond. 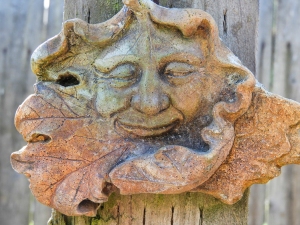 Wow! May Day is coming. Perhaps I should dance around my tree, though where it’s planted makes that impossible.

I wonder if Green George is what we also call Green Man? I have several versions of Green Man in my garden.

Figures of Green Man can seen in numerous churches, cathedrals and abbeys, largely in Britain and France. He is variously depicted as good or evil, frequently with vegetation coming out of his mouth. This can represent life returning each spring, fertility, nature and in general faith and hope.

Obversely, Green Man has been depicted as a demon, devouring all of nature, instead of bestowing it.

Whether you know him by Green Man or Jack-in-the-Green, I prefer to think of him as a spirit who guides us back to our nurturing relationship with Mother Earth.

Jethro Tull did a delightful little song about Jack. It always makes me smile and imagine the little people living in my garden.

By the way, in case you  didn’t know, the name Jethro Tull pays homage to an 18th century English farmer and agricultural pioneer, credited with inventing a horse-drawn seed drill, an improved plow, and a horse-drawn hoe. So, he was a bit of a Green Man himself!

Here are some of the lyrics for the song by Jethro Tull, the rock band. Have a listen sometime!

Have you seen Jack-In-The-Green?
With his long tail hanging down.
He quietly sits under every tree
in the folds of his velvet gown. . .

He drinks from the empty acorn cup
the dew that dawn sweetly bestows.
And taps his cane upon the ground
signals the snowdrops it’s time to grow.

It’s no fun being Jack-In-The-Green
no place to dance, no time for song.
He wears the colours of the summer soldier
carries the green flag all the winter long . . .

Jack, do you never sleep
does the green still run deep in your heart?
Or will these changing times.
motorways, powerlines,
keep us apart?
Well, I don’t think so
I saw some grass growing through the pavements today . . .

The rowan, the oak and the holly tree
are the charges left for you to groom.
Each blade of grass whispers Jack-In-The-Green . . .

Have you spotted Jack yet? 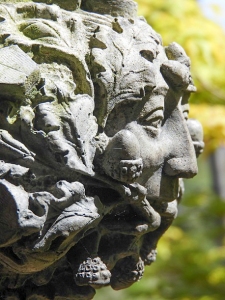 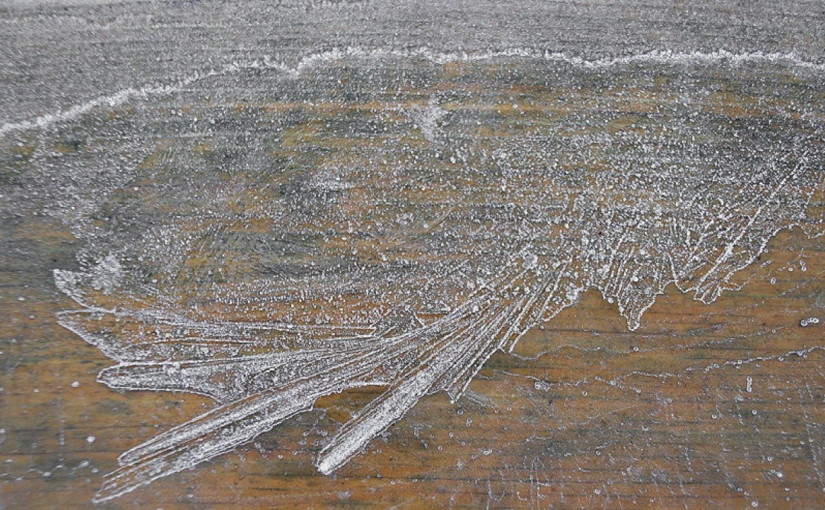 This morning it was below freezing. It’s been said that Nature was the first artist.

And so she painted in frost on my deck railing! 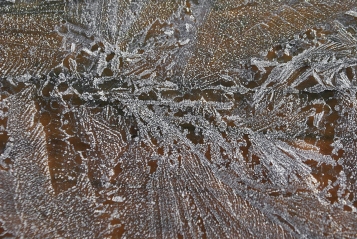 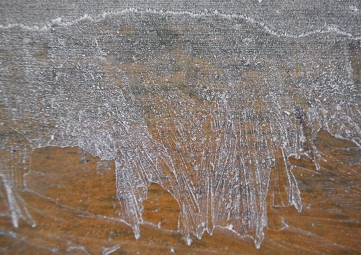 It is the life of the crystal, the architect of the flake, the fire of the frost, the soul of the sunbeam. This crisp winter air is full of it. – John Burroughs 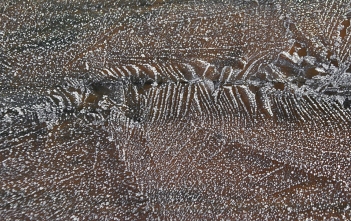 What good is the warmth of summer, without the cold of winter to give it sweetness. – John Steinbeck

Winter is a glorious spectacle of glittering fractals complete with a soundscape and atmosphere entirely its own. – Anders Swanson

Last night the breeze began to build. Tree branches danced to and fro. It rained overnight. This last summer morning, the warm season is letting us know she is not happy to have to step aside. Her winds tell us so.

This evening fall will officially arrive. The equinox is said to yield equal number of daylight and dark hours.

But as daylight hours dwindle, we have something pleasant to witness. The earth brings out her colors. 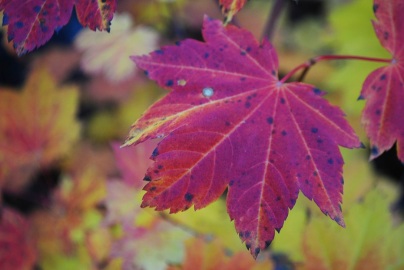 The October full moon is known as the Harvest Moon, but my Witch’s Datebook says it’s the Blood Moon. I wonder where that name came from. 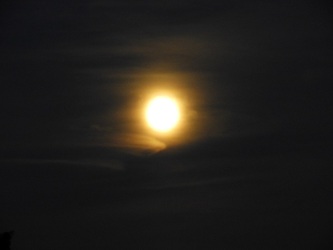 Usually, the September full moon is called the Harvest Moon. But this year it’s in October, due to the closeness to the equinox. Every few years, the autumn equinox falls closer to the tenth month than the ninth. 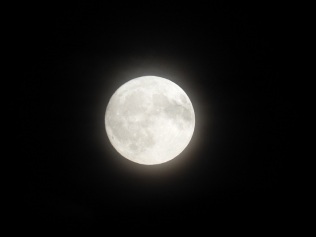 The October full moon has also been called the Dying Moon and Hunter’s Moon, for the time of year for hunting and preserving meats for winter. Perhaps the name Blood Moon arises from hunting and slaughtering.

Under the bright light of the Harvest Moon, farmers can harvest such crops as corn, pumpkins, squash, wild rice and beans. Scientists explain that most months, the moon rises about an hour later each night.

But the Harvest Moon seems to rise at almost the same time for several nights around the full moon.

Harvest your crops, or just harvest that extra long moonlight to enjoy! 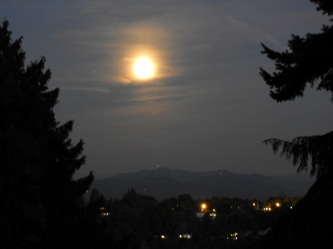