About this time of year, I start to notice the activity around my neighbor’s large cherry tree. Some of its branches arch over my backyard, though not low enough to pick any of the fruits now. I have tasted a few in the past and they aren’t bad.

This is a tree of many gifts. In the spring it graces us with its soft pink blossoms that have the effect of making the tree glow. After a couple weeks the petals loosen their grip and float on the air like pink snow.

Months later, after the tree has become a uniform shade of green, its true destiny begins to emerge. Tiny green fruits appear with the promise of a summer bounty. Weeks later, they slowly transform from green to a yellowish pink and pale reddish. During this time, I watch the ripening progress, knowing what is to come.

Then one day, some berries are fully red. Several years ago, I stood on my deck and watched a raccoon, at eye level, happily munch away on the cherries. This year I’ve seen no raccoon, but now that the fruit is ripe, the birds are wasting no time.

Robins fly into the tree and grab cherries, swallowing them whole. I’ve seen Cedar Waxwings do the same with Oregon grapes. How astonishing that a tiny mouth can open far enough to take in the berry, and then, even more astonishing, swallow it whole! It’s akin to a person swallowing a football! The cherries, however, are not as huge as the Oregon grapes. 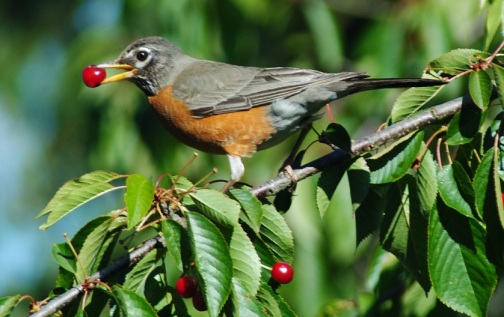 Chickadees, Black-Capped and Chestnut-Backed, peck away at the fruits. I’ve also seen House Finches and House Sparrows partaking of the free repast. But the Steller Blue Jays, with their huge bills, don’t appear to eat the cherries. I would think they, of all the birds, would be devouring more than anyone else. We have hoards of the great, raucous birds.

I would also think woodpeckers would like the fruit. I once observed a Pileated Woodpecker in Maryland that was perched amusingly on a small spicebush shrub, eating its dark ripe berries. But I have seen no woodpeckers in the cherry tree.

When all the cherries have been eaten, I wonder what the next adventure will be for the birds.