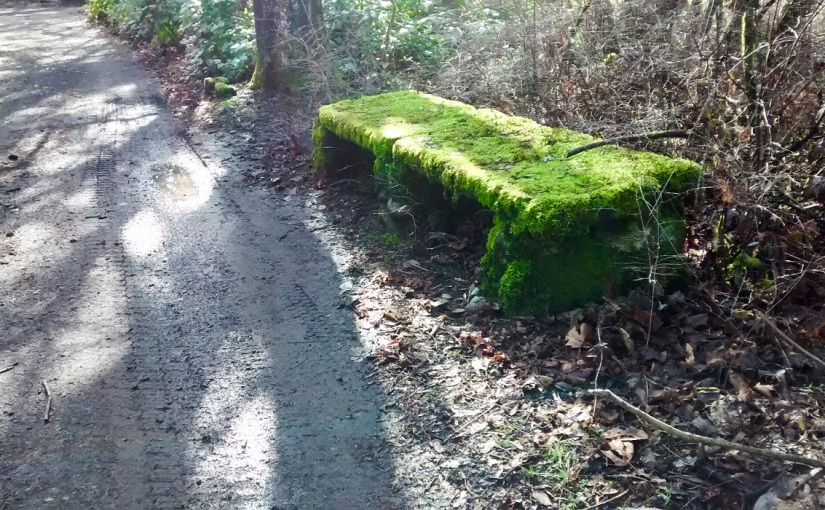 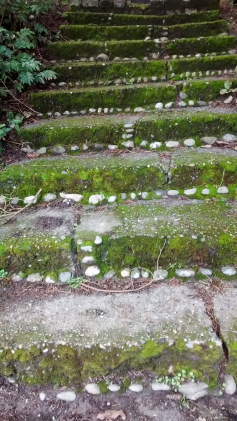 This is the cool, wet time of year when moss is at its best. Its emerald plumpness proclaims, “Look at me. My hyper green greenness demands that you see me.”

Against the grayest of gray days and the most muted tones of fallen logs and decaying leaves, moss paints the landscape with exuberant signs of life.

All green was vanished save of pine and yew, That still displayed their melancholy hue; Save the green holly with its berries red, And the green moss that o’er the gravel spread.

I like moss. Moss in my yard, moss on trees, moss on concrete, moss on brick. It drapes the concrete under my fencing. I invite it to spread across my yard, replacing the useless grass at every inch. I’ve gotten rid of most of my front lawn, instead having vegetable plots, a pollinator garden and drought-tolerant shrubs and natives. My yard is a wildlife sanctuary.

There is some moss on the ground, but I’d like more. It would save me from mowing or using mulch around my plantings.

Often overlooked or undervalued by the casual observer, mosses do serve important functions in nature. Classified as bryophytes, mosses help stabilize the soil, reduce evaporation of water and even provide food for some herbivores.

They take nutrients from the atmosphere and therefore can be indicators of air pollution.

But most of all, moss is nature’s way of reminding us that nature wins in the end. It conquers manmade surfaces. I like the way it decorates steps and benches and bridge supports. It makes them look like remnants of ancient civilizations and transforms my walks into brief visits to the past.

It is said that faeries sleep on beds of moss. I’ve never seen one, but I keep looking.

Hardware store shelves bulge with “Moss be Gone” and “Moss Out.” I say, keep your money and let the moss run wild!

This is the forest primeval. The murmuring pines and the hemlocks, Bearded with moss, and in garments green, indistinct in the twilight, Stand like Druids of eld, with voices sad and prophetic, Stand like harpers hoar, with beards that rest on their bosoms.

When I went for a long walk recently, I didn’t expect to discover hidden treasures. I walked down to the High Point pond, just a few blocks from my house. My usual route takes me around the pond, where I check out who’s there.

This day there were mallards, American wigeon, a cormorant, and gulls.

But I wanted to extend my walk and explore some new areas. High Point is a huge redeveloped area, with a variety of homes and landscapes. It’s a planned community, with mixed housing for single families, low-income families, and seniors.

There are rain gardens, permeable sidewalks, community gardens and green spaces. The planners did a good job of saving many monstrous mature trees, and a few are labeled. Today I noted a Lawson cypress, which I first thought was a Western cedar, along with a grand specimen of big-leaf maple, called “Papa.”

Along the way, I found these delightful pillars celebrating the Longfellow Creek watershed.

They are composed of blocks of concrete with carved and inlaid creatures representing plants, lizards, fish, birds, a fox and a dragonfly.

I love that nature is appreciated here. There are many immigrant families and children living in this community. I think it’s important to instill knowledge and appreciation of our local natural history. Nearby is also a bee garden, complete with a small building enclosing the hive and a flower and vegetable garden to nourish them.

As I turned down a street that I’d never walked or driven before, I discovered an intriguing sight: something out of a Greek ruin, or perhaps a group of standing stones from the British Isles. 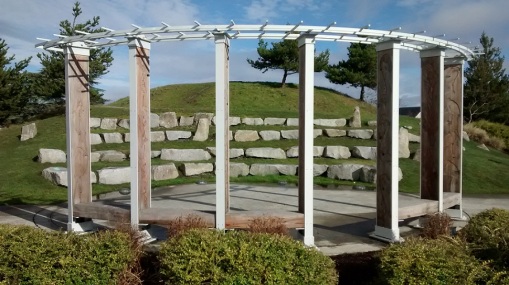 A structure, similar to a pergola, but I’m not sure exactly what to call it, stands in front of a hillside that has large stones scattered about. 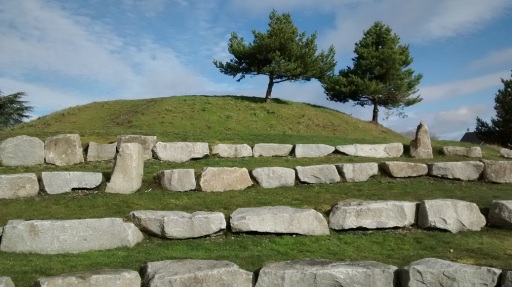 The structure is supported by posts with carved wood that portrays such birds as owls and herons. 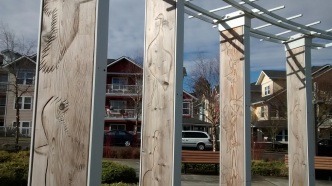 And, even more fabulous, the concrete walk between the structure and the hillside is incised with a large winged creature reminiscent of the mysterious Nazca “geoglyphs” of Peru! 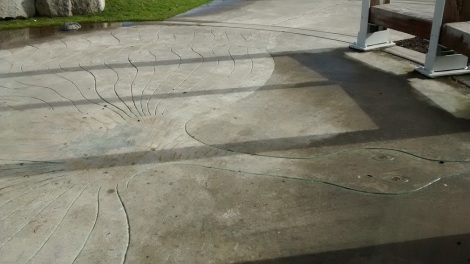 These things inspire ideas for my own yard! 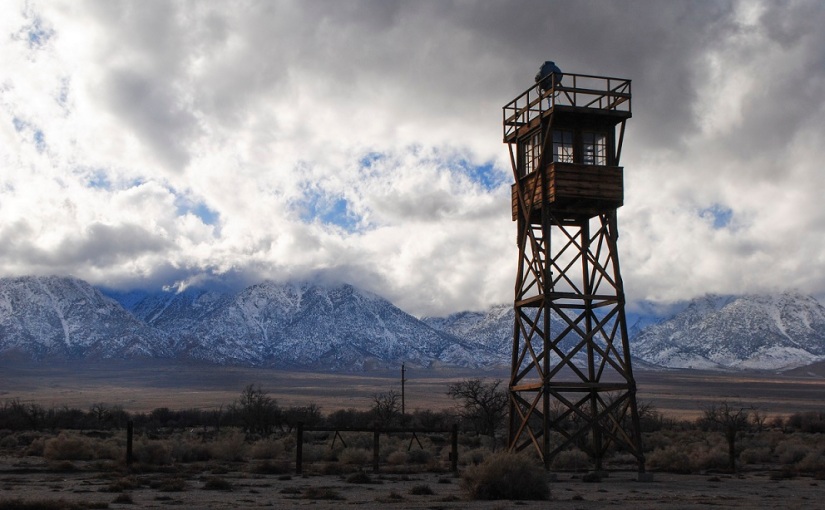 Manzanar War Relocation Center was one of 10 “internment camps” set up by the U.S. government to sequester and control Japanese Americans during World War II.

After Japan attacked Pearl Harbor, Americans began to fear and mistrust Japanese Americans, so 110,000 citizens and resident aliens from the west coast were forced from their homes and taken to these camps. From 1942-1945, the camps operated in remote, harsh landscapes. 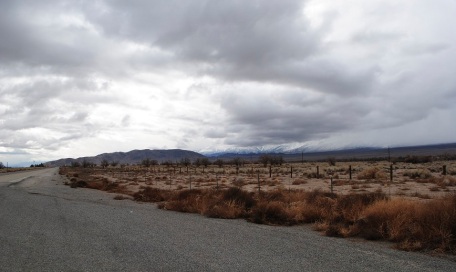 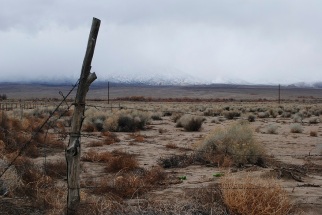 Of those rounded up for the camps, 10,000 found Manzanar their new home. They thought their stay would be short. They were told that they were “not prisoners,” and that they were being isolated for their own protection. But when the Japanese arrived at the camps, they noticed that the eight

guard towers were facing in, not out.

Located in Owens Valley, the 500-acre Manzanar camp was built in an area that had been a rich apple-growing area, thanks to irrigation. There had also been pear and peach orchards. By the 1930s though, most farmers had moved out of Manzanar, and the city of Los Angeles owned the land.

The camp consisted of 504 barracks, organized in 36 “blocks.” Each block had 14 barracks whose population totaled 200-400 men, women and children.

Although the camp was ringed by picturesque mountains, it was no vacation paradise. 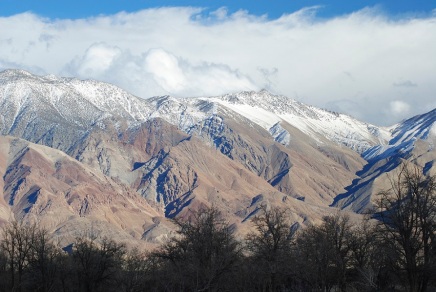 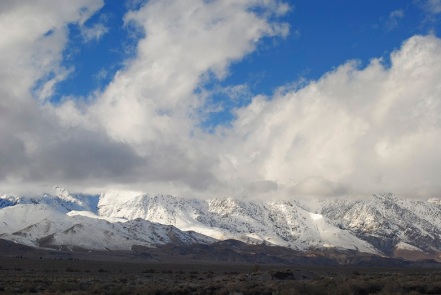 Barbed wire fences surrounded the drafty wooden barracks that would become their homes. Wind and dust blew through cracks. “Any combination of eight individuals was allotted a 20-by-25-foot room. An oil stove, a single hanging light bulb, cots, blankets, and mattresses filled with straw were the only furnishings provided,” explains the National Park Service, which manages the site. Privacy was nonexistent. Shared latrines had no walls, showers had no stalls.

The Japanese Americans struggled to retain their dignity. Their entire lives had been turned upside down. They lost their businesses and homes. They could bring only a few personal possessions with them.

But as the months went by, the community evolved. After all, thousands of adults brought their professional skills with them. There were teachers, doctors, nurses, artists, writers, craftsmen. School classes were formed. There was art and music. There were dances. They started a camp newspaper, the Manzanar Free Press. They operated a bank, beauty parlor and barbershop. They made clothes and furniture, and managed farm animals and food crops.
As you can imagine, with 10,000 residents, these services and activities were a necessity of survival, and internees were paid for their work. Some worked in the mess halls, while others served as police and firefighters. There was also a camp hospital, and a cemetery.

Gardeners found outlets for their passion by carving places out of the desert where people could find solace in nature. The internees were allowed to build ponds and gardens, and camp administrators even obtained materials for the construction. Gardens reflected the Japanese aesthetic, complete with waterfalls, rocks and bridges. These were spaces of hope and resistance.

No Japanese Americans were ever charged with espionage, and some of the internees even had sons serving in the war.

Today, there is not much left of the camp except the preserved landscape, still cordoned by barbed wire. The original entrance survives, and small signs mark the rows where barracks stood.

Remnants of orchards can still be seen, in addition to excavated garden areas.

Two reconstructed barracks and a mess hall exhibit are part of a walking or driving tour you can do. A reconstructed guard tower, with its spotlight, overlooks the area.

At the end of the tour, you will find the cemetery. It’s the real thing, not a reconstruction, with real graves and origami garlands left by visitors.

A visitor center has impressive exhibits of daily life of the internees, and a must-see award-winning short film that is so well done, it will bring tears to your eyes. And no doubt while you are there, you will experience a taste of the ever-present winds. 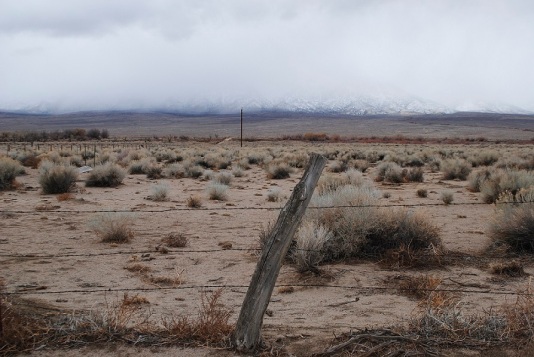