I’ve been toying with this fantasy for a while, off and on. What if I planted a vegetable garden based solely on color? After all, color figures largely in my flower garden.

With apologies to Kermit, it IS easy being green. Celery, broccoli, cabbage, lettuce, all green. String beans, peas, kale, chard, zucchini, Brussels sprouts, all green. What do most kids and many adults refuse to eat? Anything green!

Every year, when I plan my edible garden, I try to incorporate something different; something that I haven’t grown before. The old standards do well and I like them, but let’s face it. There’s a lot more to the fruits of this planet than what we eat all the time.

After just a little thought, I realized it wouldn’t be d

ifficult  to create a one-color vegetable garden. I’m talking about the actual fruits of the plant. Fruits as in vegetables. Get it? For the most part, the leaves would still be green.

So I begin with purple. I made a list of every purple or nearly purple vegetable that I knew of. In some instances, a few might be called “red,” or some “red” vegetables are in fact more purple looking, so I have included them in my list. In the process, I discovered a few more, though I might have difficulty finding them in the store. 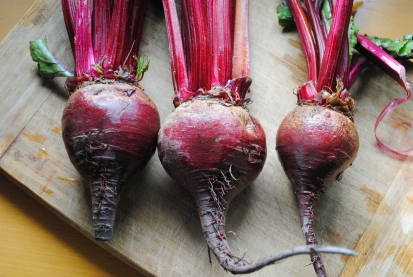 But seeds, that’s another story. All sorts of exotic seed sources exist. Seek and ye shall find.

That’s not to say that everything purple will grow in every region. Remember, it’s a fantasy garden.

Here’s a list of purple foods that exist in reality, and are possible to grow, somewhere, in no particular order:

That’s a pretty full plate of veggies! And with a few surprises. I never knew there was purple asparagus, and I’ve seen many heirloom tomatoes, but I don’t recall coming across purple ones.

The inside of a cooked purple sweet potato

Where does purple cauliflower get its color? The answer is anthocyanin, which contains flavonoid compounds. Purple cauliflower also contains glucoraphanin, a compound found in cruciferous vegetables. Both substances are said to fight cancer and are significantly lowered in value by cooking the cauliflower. I might have to rethink how I eat this vegetable!

I’ve eaten many foods on the list, including the potatoes, cabbage, kohlrabi, beets, beans, onions, carrots, kale and eggplant. I have to say that they all taste the same as other colors, but imagine the visual impact at a meal!

The next time you are in the grocery store, cruise the vegetable offerings with new eyes. I bet you will be amazed at how many foods you have never noticed. But they’re always there!