I got to see it recently while taking a ferry from Marin County to San Francisco. There it was, silently glowing gold in the late afternoon sun, with a guard tower nearby. Just a simple building at the edge of the water. There was no one outside that I could see. I had to imagine those inside.

With only water between us, I almost got a chill seeing San Quentin State Prison in real life. After all, it’s the stuff of 1940s black and white movies, in which gangsters get their due in the end. I immediately had a vision of Humphrey Bogart, dressed in shades of gray, with his classic sneer and heavy five o’clock shadow.

Among those sent there are all men who have received the death sentence in California. There have been executions in the past, but none have taken place since 2006. In 2019, the governor ordered a moratorium on executions. Almost 700 men remain on “death row.”

The maximum security prison opened in 1852 and is the oldest in California. Pretty tough to escape from there, eh? Some have tried, but no one has ever successfully fled the prison.

Oddly, the tough prison has served as a setting for numerous films and concerts. Johnny Cash performed for prisoners twice, once with inmate Merle Haggard in the audience. B.B. King and Metallica later performed there.

Bogart was indeed tied to San Quentin: he played an escapee in the 1947 film “Dark Passage.” Several other movies used the facility, including Woody Allen’s “Take the Money and Run.”

The prison has evolved somewhat since it opened. There are now programs to rehabilitate prisoners who are able to be released, and they do have access to exercise, education and entertainment. But for me, San Quentin will always be that cold, concrete place swathed in black and white, where the baddest of the bad simmer inside.

There’s an ad jingle in my memory cells that goes something like this, “Who put eight great tomatoes in that little bitty can? You know who, you know who, who, who.” For some reason, the word Sacramento sticks in my mind along with it.

When I was in the Sacramento, California, area recently, I learned that tomatoes are a huge crop there. A lovely painted vintage-style sign at the tomato processing plant in Woodland verifies that fact.

Surrounding Woodland are farm fields as far as the eye can see. No doubt many of those perfectly aligned rows get planted with the red fruits every year.

California grows 95 percent of the more than 12 million tons of tomatoes produced in the U.S. Those fruits come to our tables as fresh tomatoes, canned, paste, sauces, juice and ketchup. The state’s Central Valley is the heart of tomato country. The tomatoes are processed – cooked, crushed, diced, canned, etc., right there in the Central Valley.

The plant I saw in Woodland is among the few processors left in California. 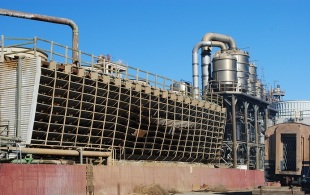 Statistics I found from 2008 show that there were 225 tomato growers in the Central Valley, farming some 277,000 acres, and working with 16 commercial canneries. 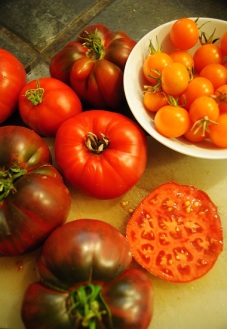 But, in case you didn’t know, the tomato is not native to North America. It is said to have originated in South and Central America. It made its way over to Europe in the 1500s. Not surprisingly, Italians were the first to start growing and eating them. Not too long after that, other countries began growing them, but only as items of curiosity. Using them for food had not really caught on yet.

It wasn’t until the 1700s that tomatoes started to be grown in the young United States. Farmer-gardener that he was, Thomas Jefferson naturally took to growing them. But there was still widespread belief that they were poisonous, as members of the nightshade family.

Now we know better. Tomatoes, which are mostly water with a little bit of fiber, are  highly nutritious, providing vitamin C, potassium, vitamin K1, lycopene, and beta carotene, among others. And, how about they are just plain delicious! Who doesn’t love a fresh tomato sandwich? Where would pasta be without sauce?

But even as bountiful as the tomato crop appears, and as endless as our appetites are for tomato products, it remains a risky and costly commodity to produce. Tomatoes like sun and heat, but not too much. California is known for a long growing season, but also for a lack of water. Fuel to power mechanical harvesters, fertilizer and water eat into any farmer’s profits. Throw in unpredictable weather. 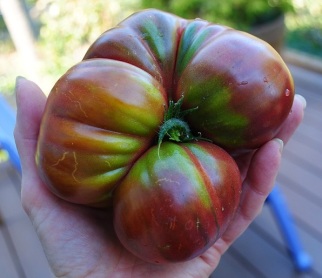 Thankfully, we now have small and organic farms growing heirloom tomatoes in almost any state that we can buy locally and at our farmers’ markets. We don’t have to depend on big footprint, long-distance crops, at least part of the year. I, along with millions of other Americans, plant my own in my frontyard garden every year. 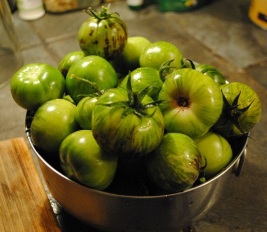 Each season is an exciting unknown: which varieties will I try? Which ones will taste best? I know that plants sold locally will do fine in my zone. My favorites have been Black Krim and Green Zebras, but I always aim to pick at least one new one to try.

Once thought to be poisonous, tomatoes are beloved and devoured by the tons. The perfect tangy, juicy tomato is the Holy Grail of our summer gardens. Let’s hope that no matter how our climate evolves, we’ll always have tomatoes. 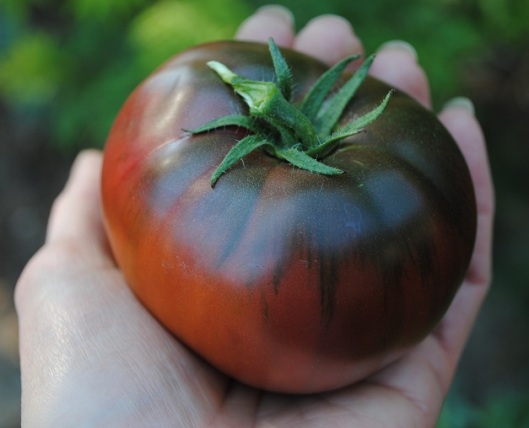