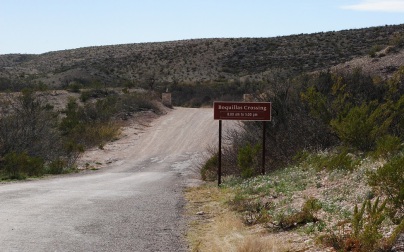 I crossed the border to visit Boquillas del Carmen, a tiny rural village next to the Rio Grande in the prinicipality of Ocampo, in the Mexican state of Coahuila. The town was recently featured in a New York Times article in which the reporter visited border towns to portray life on each side. At the time, Boquillas was suffering from the U.S. government shutdown; it’s largely dependent on tourism.

The U.S. makes it simple for its citizens to venture to the other side. I had taken my passport along on my trip to the Big Bend area of Texas, just in case something strange arose, such as a need for prove my citizenship. You never know, right?

A few days before my trip began, the shutdown ended and the passage to Boquillas opened up again. I hadn’t planned on going over, but a few days into my trip I decided I could fit it in, and, why not? I had never been south of the border, and it was a quirky opportunity.

On the day of my crossing, I drove through Big Bend National Park to the little southwestern style Border Crossing Port of Entry building. 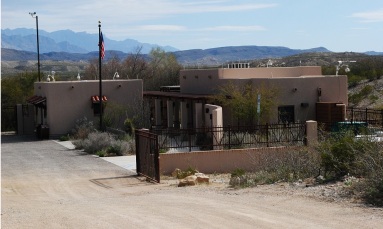 I went in and showed my passport to the agent. He looked through my backpack. OK, that’s it. I was approved to go.

“How do I go?” I asked the agent. “Through that door and follow the path to the river,” he pointed. I stared at The Door. The magical door to the other world.

I returned to my car briefly to figure out what to wear and take, and then walked excitedly back to the building. I gave a nod to the agent, ensuring he remembered just seeing and approving me, and opened The Door.

I found the dirt path and walked the short distance to the river bank. I looked across. There it was: Mexico. The storied rowboat that I had read about awaited me.

The Rio Grande is narrow and shallow here, facilitating friendly relations and easy passage and trade between countries over the past centuries. Even the customs agent had seemed easy going and not too concerned about anything.

The boat trip lasted maybe two minutes. I admired the oarsman’s strength and wondered whether he was the only one who had to make the round trips many times a day, every day of the week.

On the Mexican bank stood many local men, who waited to take visitors by burro, horseback, or pickup truck into town. I opted for a burro, after seeing most tourists on them.

A couple of firsts: first time in Mexico, first time on a burro (or donkey, as they are interchangeably used).

My guide was selected for me, by a process unknown to me, and he then selected my burro. Daniel was my guide and Machete was my ride.

I hoisted myself up to the animal’s back. It was not an easy task.

The saddle was hard and the walk into town was sometimes bumpy on the dirt track. If a truck was coming down the road, Daniel would shout “Burro,” and Machete would move over. Again, I wondered how many times in a day or week that Daniel did this. I paid $5 for the boat ride. I paid another $5 for the burro ride. How much did Daniel get to keep? He did not own the burro, so I imagine there is a big cheese somewhere who owns the burros and “employs” the guides.

When we got within sight of town, it was time for me to dismount, so Daniel could tie up the burro where he could rest, and we could walk up the hill.

I did not ask too many questions of Daniel, but I did learn that he was born there and has lived there all his life. It’s a hard life, I’m sure.

But the village, with a population of about 100, is run entirely on solar energy!

Daniel gave me a tour of Boquillas, during which we passed very modest homes, a couple restaurants, a bar, a grocery store, a school, a health clinic, a customs office, and the solar energy facility. I was amazed at that, and happy for the residents. I especially liked the colorful buildings.

In front of many homes, along the street, there were tables filled with handmade crafts. It seems everyone makes the same items: small beaded, wire-framed figures of ocotillo cactus, roadrunners, spiders, scorpions and such, and embroidered objects and T-shirts.

Many items proclaimed No Wall and No Al Muro. I wanted to get something with that message, for sure.

One surprising feature of my tour was a look at some sand dunes. I have seen sand dunes before, so I wasn’t too enthused when Daniel offered to show me theirs. But, when we got to the viewpoint, yowza! It was stunning.

It was lunchtime and I had to choose a spot to try the local cuisine. I settled on one and sat outside with Daniel.

We both enjoyed “Mexican” Cokes, made with Mexican sugar, the owner proudly pointed out. Another first for me! I offered to buy lunch for Daniel, but he declined. Another American couple sat at a nearby table.

While we waited for our food, we tourists stepped inside the small eatery to check out the crafts for sale. Women were busy in the small open kitchen, making our food. There were T-shirts and religious items, along with table cloths and food items. When I spotted a shirt with a burro, I had to get it. Machete would live on once I returned to Seattle.

It was easy to see how tourism is the life blood of Boquillas. I couldn’t buy something from everyone there, but I could help in my small way. I tried not to seem like the typical American tourist, and I hope I succeeded. I had purchased a couple items from a woman near the other end of town, and then after meeting Daniel’s wife and young son, I bought a couple more from them.

Then it was time to head back across the “big” Rio Grande. We collected Machete and I hoisted myself up again. I turned and waved “Adios, Boquillas.” When we got to the river, the boat was waiting, with the other couple already seated.  I dismounted, said goodbye to Machete, thanked Daniel and started to walk toward the boat. Suddenly Daniel said, “My tip?” I was startled. I had not even thought of a tip! I quickly went to my wallet and found a few dollars.

Back on U.S. soil, the couple and I looked at each other and were sad that our little adventure had ended. We chatted about how we wanted to do more traveling.

I kept thinking I should have given Daniel a much bigger tip. He had walked me round trip, in the sun, on the dusty trail, showed me all around the village, sat while I ate, and allowed me to take his picture. Because the residents take only cash, I had spent most of my small bills, so I didn’t have much to give except a large bill. I wondered if the burro owner pays the guides at all.

The experience was definitely worth it and I recommend it to anyone who is going to Big Bend. I’m sure visiting Boquillas for a brief excursion into Mexico is a much more personalized and authentic experience than crossing the border at, say, Juarez or Tijuana. And it reinforced the knowledge that we Americans are so lucky to be able to cross borders freely, to come and go, while others are not so fortunate.