There are a lot of anomalies in the animal world, not unlike the human world. Animals are born albino – lacking the usual pigments, or melanistic – having darker than normal pigmentation. Some are born with extra toes or curly coats.

Eastern gray squirrels can exhibit several variations. In certain regions, many are all black. I even saw some around the U.S. Capitol that were white and light brown in color. I have learned that it’s not uncommon for them to have short tails.  I have noticed one frequent visitor to my yard. I dubbed it Stubby Tail. I am not sure whether it’s female or male, but I am thinking it’s female. I recently saw it being followed closely by another squirrel, and it just seemed like a female-male thing. So, let’s say Stubby Tail is a girl. 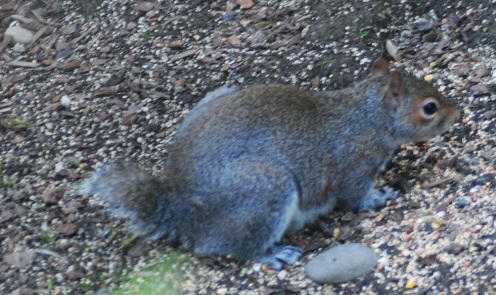 Normally, I can’t tell one squirrel from another, unless it has a specific field mark. Stubby Tail makes it easy. And normally I have no particular affection for the rodents, as they paw through my flower beds and try to break into my bird feeders. But I have come to like Stubby Tail.

At first, I thought she had survived some sort of attack and lost part of her tail. But the more I examine it, the more I think she was born that way. The tail is about one-third the typical length, very bushy and kind of stands up, with a bouquet of fur sticking out in all directions at the end. If it had been a normal long tail, and had gotten snipped off, I think it would be straighter and just look like a tail that had lost its end half.

When I did a web search on squirrels with short tails, I turned up some interesting tidbits. Other people have observed the same phenomenon, and I found some photos that looked exactly like Stubby Tail! I was not alone and neither was Stubby Tail. My Stubby Tail gets around fine and acts pretty normal for a squirrel, as far as I can tell. Her lack of tail length does not hamper her jumping or climbing or running. No doubt her body has adapted to a different way of balancing.

There are some functions that Stubby Tail will miss: squirrel tails can provide shade against the sun and warmth against the cold. But I suspect she already knows how to cope.

5 thoughts on “A Short Tale”