Fog is a frequent visitor to Seattle and I usually enjoy it. Sometimes I take my camera and dash out before the fog begins to lift. On a recent December morning, I awoke to find pea-soup fog obscuring the view.

I decided to go down by the water, across from the downtown skyline. Only, this  morning, there was no skyline! Imagine how it would appear, looking across Puget Sound to where the city is – or used to be! 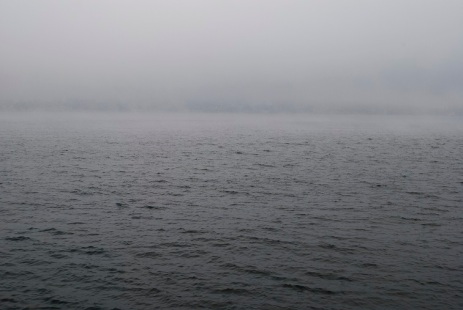 The scene reminded me of a fond memory of taking a Zodiac in Scotland across a bay to the Isle of May. We started out in thick fog. We could not even see the island. But as we neared the island, the fog lifted and there it was. 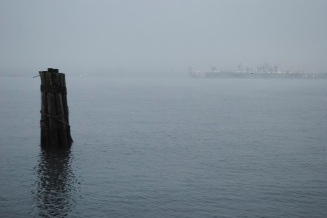 he foggy day in Seattle. It was a quiet, damp and chilly morning. Along with the fog, frost had covered some surfaces overnight. Shades of gray stitched together land and sea, with puffs of fog occasionally floating over the water.

A few distant lights broke through along the docks. 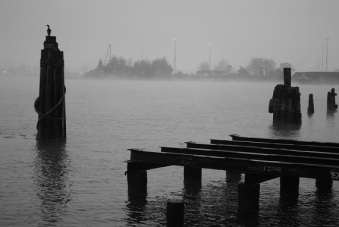 The only signs of life included a few cormorants, geese, and pigeons.

Humans included several determined anglers lined up on the dock, intent on hooking squid, and a few people boarding the Water Taxi for the commute over the water to the disappeared city. 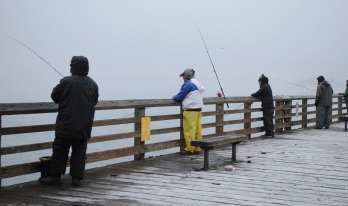 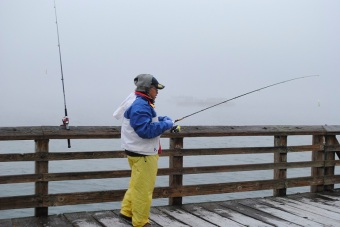 I took a close look at one squid pulled out by an angler and placed on a bench. It was exquisite, still wriggling and struggling to live.

Its skin was surprisingly colorful and pearly, sprinkled with tiny colorful spots like confetti. 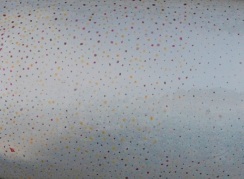 I could not imagine killing and eating these intelligent fascinating creatures, especially out of that heavily used port. But the fishermen were happily loading their buckets. 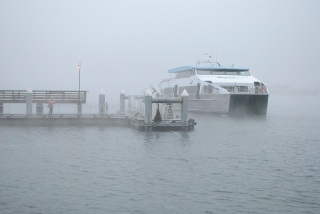 3 thoughts on “A Recent Foggy Morning”