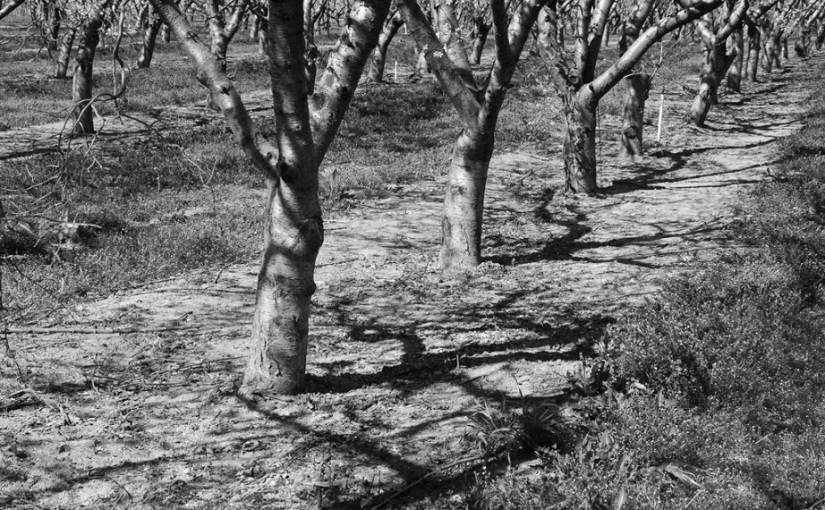 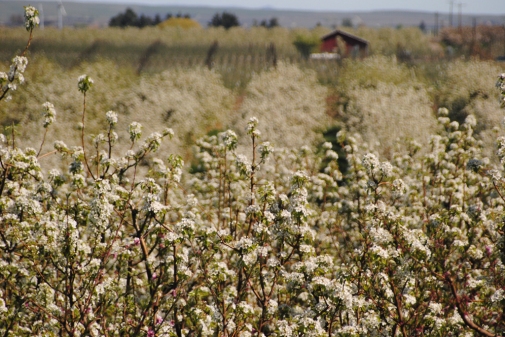 Washington state is the apple-growing leader nationwide. You’ll see proof of this if you drive around Yakima Valley or Wenatchee, where the orchards are concentrated. The other top regions are the Columbia Basin, Lake Chelan and Okanogan.

I wanted to photograph orchards in bloom for a while. I thought, rightly so, that huge stands of trees covered in white blossoms must be a sight to see. Not just apple trees bloom in the spring, but also pear and cherry. I had written off finding cherry orchards and focused on apples. Pears, if I found some, would be the ice cream on the apple pie, so to speak.

I had driven around Wenatchee once, so 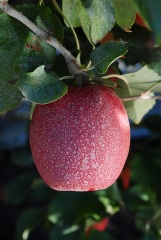 I knew there were many orchards there. In fact, the town has an apple visitor center, where you can learn all about the state’s sweet crop. But Wentachee was a longer drive from Seattle than Yakima, so I scouted out some areas near Yakima last fall, and found an ideal spot in Zillah.

My gut told me this could be the time, but in order not to miss the blossoms, I needed to go have a look. To Zillah I headed. It’s about a two-hour drive through shrub-steppe country. There‘s a nice rest area near Selah with a view of Mt. Rainier and Mt. Adams where I usually stop for lunch. There was a clear view of both peaks.

After my break I headed on to Zillah. But before I got there, I began to see orchards in bloom, and whitish blobs covering the hillsides in the distance. It took a minute to realize I was seeing apple orchards in peak bloom! 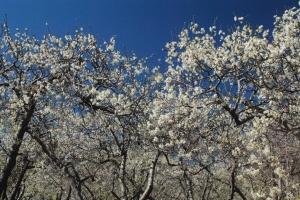 I made a quick decision to take the next exit and find the road that was closest to the orchards. I was just ahead of Zillah, but I knew I didn’t need to continue on. I wouldn’t find anything better.

It turned out I had arrived in the little town of Buena, and buena it was! This is not a ritzy area and the homes are very modest, but it seemed that even the smallest p 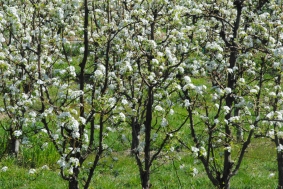 lot of land had a mini orchard on it. Apples are lifeblood here, or at least, a sideline.

I found a main road that stretched north to south, with orchards in view. I turned off to a side road to get closer to the trees. Along the way I found a big old abandoned house and just had to stop to photograph it. Large trees cast soft shadows on the grass in the bright sun. A hundred years ago it was a grand house, surrounded by farm land. Now its windows were gone and the inside all graffitied up. I wondered how such a once-grand house could get to this state. 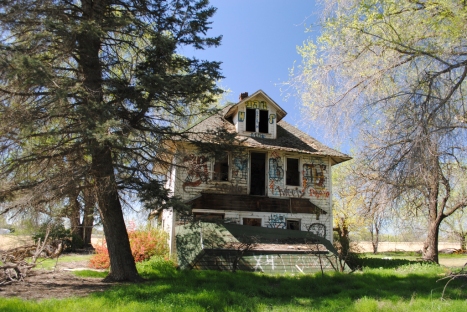 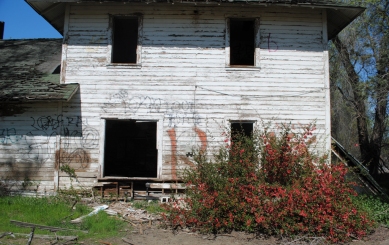 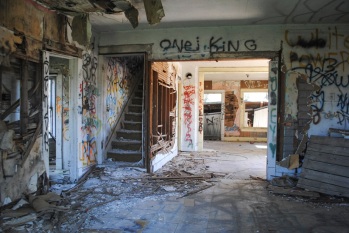 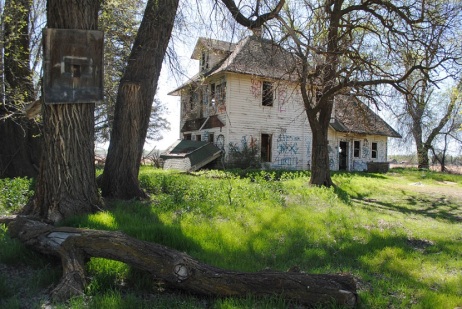 That the house was left to stand was evidence of someone’s respect for the past, or a simple lack of money either to fix it up or tear it down. What happened? Who now owns the property? Perhaps the last owner died without family who could take over. Perhaps someone tried to sell it and gave up. Why had no one rescued it before it fell to vandals? The locals must have a name for it, maybe “the haunted house,” or “the Smith house,” or “the big house.”

But I had to move on and find my orchards! I scanned the landscape as I drove, and spied an orchard up a side road that looked promising. I turned around and headed up the hill. Beautiful orchards on either side of the road came into view. I pulled onto a dirt drive and got out of the car. 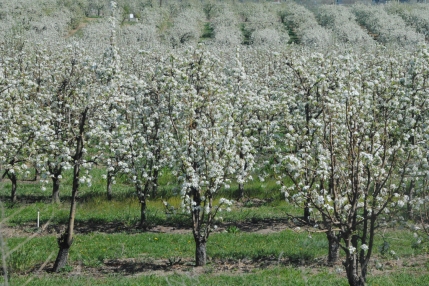 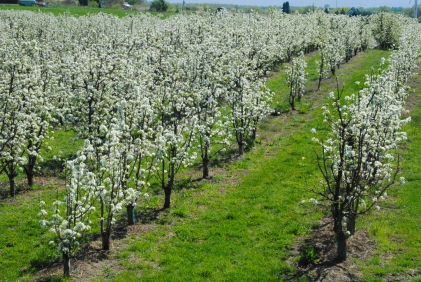 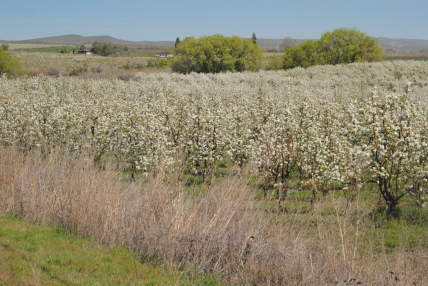 As I was admiring the landscape, I could hear what sounded like a hawk nearby. I looked around and finally looked up. Overhead were four red-tailed hawks, perhaps two pairs, wheeling around and squawking. What a treat! 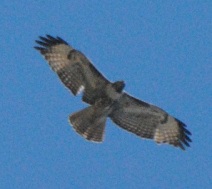 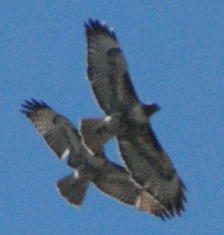 Across the road and along the irrigation canal was another orchard. Mt. Adams loomed to the west. 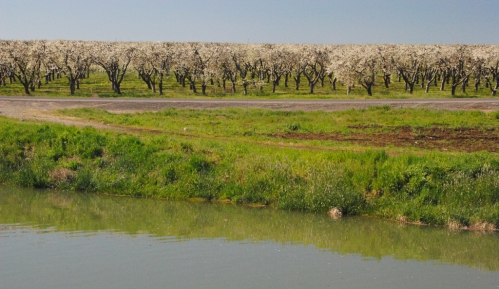 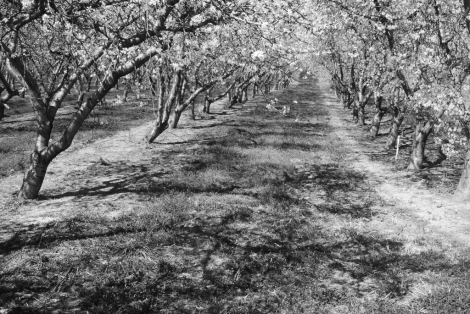 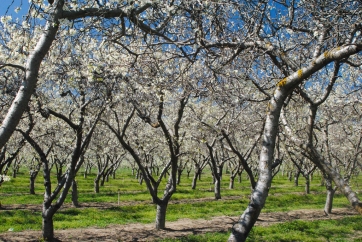 Upon close inspection of some blossoms, I noted that bees were happily buzzing from flower to flower. I wondered if the orchard owner had rented bees. I didn’t notice any hives, but I guessed that bees must be rented every year to 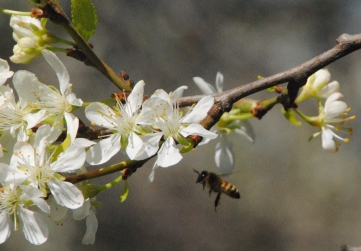 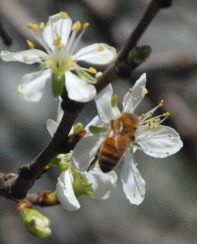 nate all the trees.

When apples are harvested, they’re loaded into traditional wooden boxes, which hold 40 lbs. of fruit each. You can see these in big stacks here and there. 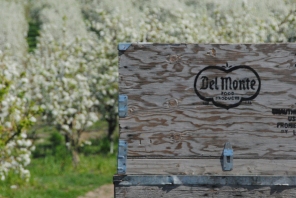 On average, the state harvests 125 million boxes every year. Washington grows 6 out of every 10 apples eaten in the United States, and its apples are enjoyed in some 60 different countries. 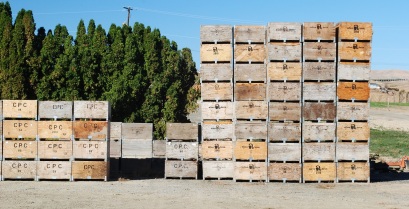 Though the varieties that we export are a paltry drop in the apple crate when you learn there are 7,500 varieties of apples grown around the world. Apples arrived in the new North American world with the colonists.

Archeologists have determined that apples have been eaten as long ago as 8,500 years, according to the Washington Apple Commission. Apples are said to have originated in Central Asia millions of years ago. So Adam and Eve might not have been the first to indulge.

Various notions and legends about apples have been passed down through generations. “An apple a day keeps the doctor away.” We also say, “as American as apple pie.” Putting apples in a pie may be American, but now we know apples themselves are hardly American. 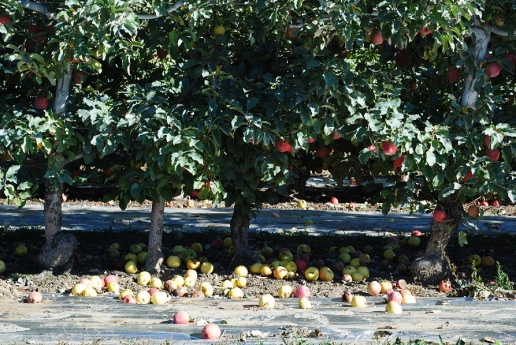 We have our folk hero, John Chapman, aka Johnny Appleseed, whom we imagine lived humbly, dressed shabbily and went barefoot, casting apple seeds everywhere he went. In fact, he was a nurseryman who collected seeds and raised trees. 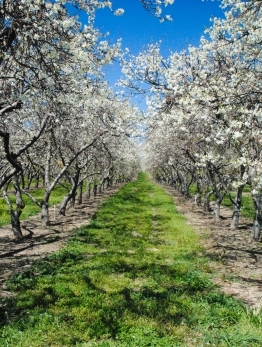 Crunchy, sweet and juicy.  Red, pink or yellow. The next time you bite into one of nature’s wonders, think of the growers who nurture their trees and the countless laborers who hand pick the fruit every year so you can enjoy it!